We had shared an interesting ferry `cabin' with a French couple overnight in which one was meant to sleep sitting up. However, having discovered the fold out beds we weren't meant to be using and with the help of our camping mats, all four of us managed to construct some sort of bed in the tiny room. Communication between us was limited but sleep was not so bad. We wandered outside in the morning to see our first views of Corsica. The wind was immense, and wandering from one side of the deck to the other I identified what I thought was still France on the skyline. Another English speaking passenger informed me that this was infact the `Cap Corse' (the part that on a map of the island looks a bit like the walkie-talkie antenna). Oops. Corsica looked a lot bigger than I had expected, and we were meant to be walking from one end to the other. 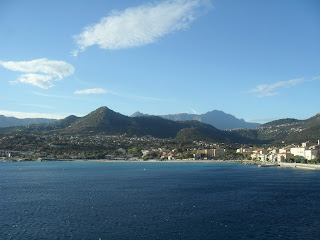 Our first impressions of L'Ile Rousse was that it was a big step up from Marseille aesthetically. There was one negative point - none of the creperies were serving crepes at nine in the morning. We managed to buy a supply of meths after some poor pronounciation attempts. We then joined a long queue of elderly tourists at the tiny train station to buy a ticket on the L'Ile Rousse to Calvi train, stopping at 'Calenzana - Lumio'. I had a map with me, carefully torn out of the guidebook, which showed the line sticking to the coast and not going anywhere near Calenzana, but I assumed that must be for the summer tram I had heard about on the internet, or something. Turns out I was wrong - halfway through the journey I realised that we also didn't seem to be turning inland and it didn't seem at all feasible that the train could get from Calenzana to Calvi in less than ten minutes at the speed we were going. So it finally dawned on me, a couple of minutes before we were forced to get off (the train was too crowded for us to talk to the driver) that `Calenzana - Lumio' was in fact on the turn off from the main road to Calenzana, 8km from the actual village. The only buildings at the train stop were a petrol station and some sort of Ministry of Defense centre, wonderfully useful for us. The guidebook states that `most people who try to hitch along this road are unsuccessfull and end up walking the whole way' but Jack clearly has more charm than your average walker and we got a lift from a young woman named Anne, who even went out of her way to drop us off at the gite. 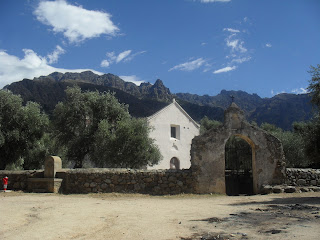 She told us that her 11 year old nephew had walked the first few stages of the GR20, so she was sure we'd have no problems. He probably didn't have a massive pack on though..

On arriving at the gite, we left most of our stuff and took light packs for an afternoon stroll to the Romanesque Chapelle di Santa Restituta where a beheaded Corsican martyr is buried in the crypt below the church. Sadly it was shut so we just sat and admired the scenery before walking back. Calenzana was a lovely town with good paninis for lunch and good pizza for dinner (though Jack chose to have pasta - he clearly didn't think he'd be getting enough of it over the next two weeks), plus the usual patisserie, boulangerie, etc.. There were some nice people too - a Swedish family who quizzed us on our plans and kept saying how jealous they were of us and also a friendly French waiter at the restaurant who enjoyed chatting to us in very fast French even when I looked blank (and as became a recurring theme, insisted on addressing Jack even though we'd been clear that it was me that spoke a bit of French)! We enjoyed what turned out to be our last working, hot shower for a long time back at the gite, though this fact had not occured to me at the time. Many people had arrived at the campsite during the afternoon and it was a noisy night - the only one on the whole trip though where people didn't fall silent after 9pm. Can't really complain at that.