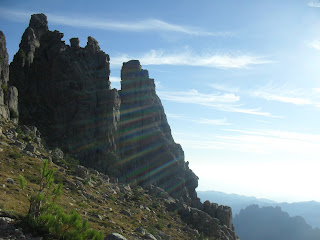 We had discussed the day before the possibility of doing two days in one and finishing the trail today. Martin had given us the idea as he was doing this and had walked the section from Bavella before, saying he reckoned we could do it in three hours, meaning the whole day should only take about ten hours (solid walking time). I sneakily set the alarm forwards five minutes. Any earlier and it would have meant leaving before dark, so it was a bit of a pathetic gesture. We finished the wholegrain bread before packing up the tent and setting off on the high level route, as it was a clear day.

I was surprised by how dramatic the scenery still was even though the peaks were getting lower. We met Martin and The Green People on the ascent and then many guided groups of climbers on the descent, some of whom were lacking a lot of confidence on the terrain considering what they'd signed up for. Bavella was traditionally a `summer village' for Conca, consisting of a collection of small rectangular houses with corrugated iron roofs. It now caters for a booming number of climbers/walkers and hence even has a pizzeria, and sells food at slightly-less-than-mountain prices. 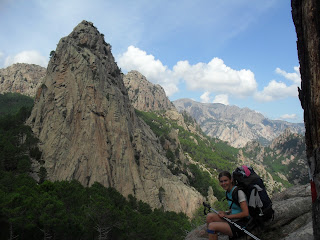 The next place we stopped, though just to pick up water as it was a very hot day, was the Refuge d'i Paliri, which seemed to be undergoing a makeover. It was a pretty straightforward walk from here. In fact if it hadn't been for the heat, tiredness in my legs and the fact that my nose wouldn't stop running, (as it had been for the entire trip) then it might have been a really easy afternoon.
I tried to enjoy the last of the mountains as much as I could but to be honest I just wanted to reach the end. The path had been devised cleverly to allow you no glimpses of civilisation until the final half hour of descent and even then it was still a surprise when you caught site of the spring and main road through the trees. My emotions were a mixture of relief and excitement and we stopped for a celebratory photo before walking through the village to the bar. The half a bar of mint cake we had saved as an emergency energy/moral boost was consumed. We had pushed ourselves quite hard during the afternoon to arrive just after 4pm. This meant plenty of time to really enjoy the hot showers at the gite before dinner. It is nice to feel clean and also not know that you're inevitably going to get very dirty again the next morning! 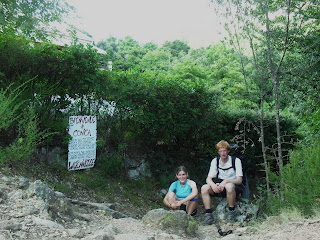 Greg and Martin finished shortly after us and we joined them for drinks and dinner at the gite. The waitress was confused when Jack and I didn't express an interest in buying any of their 20€-a-bottle wines but instead insisted that we were fine with the much cheaper A.O.C. house wine. When you're used to the whatever's on offer in Sainsburys this tastes perfectly acceptable. It was a lovely evening, great to be able to relax and also have the chance to get to know some of the people we'd been walking alongside better.
Posted by Hannah Roberts at 15:46