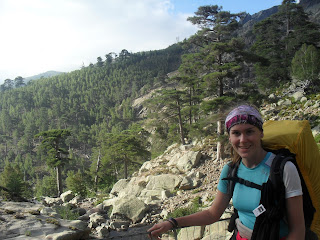 Martine had pointed out to me the day before, that in her French guide book (which contains excellent 1:25000 maps) day four had taken up one page where as day five ran over four whole pages! It was indeed a relatively long walk but the kind Jack and I were quite used to - mostly flat woodland paths. So this was an easy day by comparison. In the morning we met a guided group of hikers, something I knew existed but we hadn't seen yet. Now most people either walk slowly or take plenty of breaks. This group did both. They also hadn't been taught their trail manners very well and we were forced to follow them for quite a long while until an opportunity arose for an off-path overtake.


We passed another ski station around midday and stopped to buy food for lunch. The only vegetarian option was a Corsican cheese sandwich. When we came to eat it later we found it to be more cheese than bread, and rather strong salty cheese at that. Most of mine got hidden in the roots of the tree we were sitting under but Jack manned up and ate his. 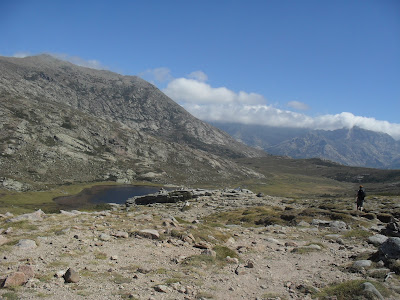 In the afternoon we passed the Lac du Ninu at an altitude of 1743m and it didn't seem like we were in the mountains at all. In fact with all the grass, wild ponies and comparatively gentle rolling hills it felt more like the New Forest. When we got to the refuge we realised that in doubling up we seemed to now be amongst a much bigger crowd of people, mostly Germans. We saw Martine, Emmanuel, Denis and Pascal again in the queue for the shower, it was good to still have some familiar faces around and amusingly during my turn I heard someone comment that the English must be used to cold showers as we didn't make nearly as many gasping/screaming noises as Denis and Pascal. The water was so bitterly cold it made my head hurt!

We were joined for dinner (pasta with real bits of vegetable in it followed by fruit salad) by a young American and French couple who were walking north from Vizzavona. They advised us to take some of the higher alpine variants to the trail over the next few days as they were well worth it, so long as the sky was clear.
Posted by Hannah Roberts at 14:22