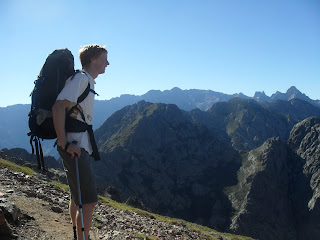 Plenty of scrambling on this stage! We left a bit late (my fault as I was not used to the cold, early mornings yet and so put the alarm on snooze). A 600m climb soon warmed us up though. This involved crossing a massive boulder field which was interesting but something we would have to become accustomed to doing on an almost daily basis. Once again a bocca was reached with more spectacular views and beautiful scenery. I was silently hoping I wouldn't start to take these forgranted as the trip went on, and indeed I didn't. We didn't pass as many people as we had on the previous day, but did stop to chat with one French couple who were doing the whole Bonifatu circuit (about 3 days of our walking) in one day. Our surroundings consisted of lots of rocky mountains and pinnacles - hence all the scrambling. One particular bit Jack and I both found quite scary:
The flattish path stopped suddenly to climb up a granite gully but just before this there was a rock face on the left hand side and sheer drop to the right. To pass the drop it was necessary to transfer your weight to the right hand wall of the gully before scrambling up.

The day's walking finished with a long and arduous descent to the refuge, we had a few glimpses of it through the trees on the way down but it seemed to be taking an age to get there and by the time we arrived my legs really needed a rest.


The sun was still out when we arrived, as it had been all day, so having had a poor first ever attempt at peg-free tent pitching, we queued up to brave the cold shower and tried to do our laundry. The lack of plugs in the sink became an issue, as I had taken a bottle of concentrated eco-friendly laundry liquid, but nevermind. As I was lovingly hanging my clothes out to dry on some carefully placed guy ropes, Martine came over and helpfully pointed me in the direction of a large area of flat rock, heated by the sun, where they had spread their clothes. Unfortunately this advice came a little to late for Jack whose larger, heavier t-shirts took a lot longer to dry than the 60g-a-piece coolmax tops I had managed to buy in the sale. And so we learnt important lesson number 2 - laundry should be done on arrival at the refuge in order to take advantage of the limited afternoon sun, in addition to this, a good tent spot consists of a large, flat pitch with accompanying nearby boulder. 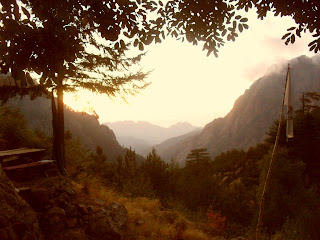 We decided to buy dinner and breakfast at the refuge in order to get to know other people. This was a good idea - we were placed on a table with Juan Carlos and the Quebecan and Denis and Pascal and were able to participate in the odd conversation. Pascal had a rather distinctive laugh that he had become known for already, and was quite infectious. The food was wholesome and plentiful, but did taste overwhelmingly of pepper. A beautiful sunset was enjoyed by all on the terrace afterwards and many people got out their snazzy cameras for the occasion.
Posted by Hannah Roberts at 14:04